on July 23, 2013 by Fiona Ryan
Filed in: Brisbane, Restaurant Review

Usually, I bring my lunch from home or draw on my ‘supply cupboard’ at work.  I do this for a couple of reasons including: simple economics – lunches from home are cheaper; quality – I can be certain about the ingredients; geography – there’s not many options down this end of town.  A variety of circumstances in the past few weeks however has meant that I’ve ended up eating Japanese for lunch quite a lot.  When I say Japanese, I mean the typical fare served up in most CBD venues across the country, not high quality, artfully prepared masterpieces from top end restaurants.  Three different venues, all remarkably similar, each with their differences.

Situated on Elizabeth St, it can be a little hard to spot between the doorway to the ‘Gentleman’s Club’ and a convenience store. Climb the stairs and you find a large restaurant with booths, small tables and an enormous communal table.  I arrived early and had some trouble making myself understood to the cashier so I just sat in the waiting area until my friends arrived and we were all seated together.

If my research is correct, ‘Warawara’ is Japanese for ‘bustling’ and an Izakaya is a place in Japan where you go to drink alcohol, typically, after work.  I’ve noted that quite a lot of places of late are tacking ‘Izakaya’ on to their name and I’m not sure how genuine they really are.  This one at least serves up late night doses of Karaoke.  It seems though that WaraWara may be Korean owned, going by their Facebook page and some of the dishes on offer such as Bimibap.  So, probably not the most authentic experience your going to find.

We ate from the set lunch time menu which gives you a bit of a selection in the form of a Bento Box. I chose my old fave Gyudon (Beef & Onions) which came with a ‘tempura’ prawn, rice, a small salad, miso, half an egg and when it arrived, a special surprise in the form of some agedashi tofu. There was side dish of what certainly looked and tasted like kimchi to me but what’s a little cross over between friends? We’d arrived early so our meals didn’t take too long but the time we were leaving, the joint was jumping.

Pro:  It’s good to have some variety from the typical rice bowls, included in the lunch specials.  It’s also nice to be able to eat in a proper restaurant, not a food court!
Con:  Service is reasonable though you really need to flag someone down to get their attention as once the meals are served, that’s the last you’ll see of them. People have complained about this but what can you expect for a meal under $15?
Overall:  The meal was tasty and reasonably priced for the quality and portion, in a sit down CBD venue. 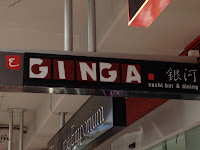 There’s a few Ginga’s around town, at Westfields and the like but there also happens to be one quite close by to where I work.  To be honest, whilst I walk past Ginga every day, I’d never been inside. It has a large eat in area, ala carte and rice bowl menu, dumplings and sushi as well as a sushi train and takeaway. It’s really got all the bases covered and at Emporium at least, does a roaring trade during lunch time from the surrounding office workers stranded in the wilderness.

The sit down lunch menu has the typical selection of pork and chicken rice bowl dishes.  I chose my favourite, Katsudon which is crumbed pork with lightly beaten egg and onion over rice with a variety of condiments.  To order, you press a little button at the end of your table that’s marked ‘service’.  I arrived early and was my order taken relatively swiftly but the staff are stretched so this could be a problem later in the lunch hour. 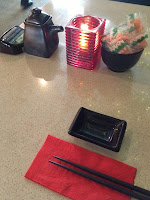 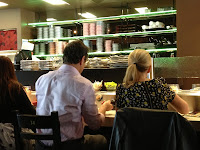 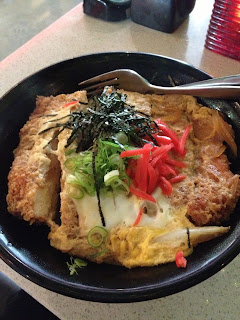 My Katsudon arrived in a reasonable amount of time and looked like a supersized portion.  A huge bowl of rice, an enormous pork cutlet and all the fixings including eggs, onion, wakame and pickled ginger.  I thought the ginger was pickled radish so watch out for that lest you end up with a mouthful of ginger.  The dish was warming comfort food on a cool, wet day but had far too much rice for me so a lot of was left behind.

Pro: Gigantic serves – this is where you take your teenage son or public servant co-workers who complain about value for money all the time.
Con: Woe betide the person who goes straight to the counter from their table without pressing the ‘bill’ button.  Even if you have your table number, the counter staff won’t be able to cope and will rush off to find your bill.  Of course, getting someone to actually bring the bill to your table can be a challenge in itself…
Overall: A definite saviour for those who work down near Newstead.  There’s variety and value on offer. 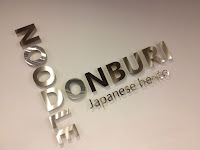 Noodle & Donburi used to be called something else and was a specialist ramen house.  It was very handy for us to grab a quick bite before we headed over to see a show at QPAC.  It changed hands and fit out and has been resurrected serving Donburi (meaning ‘rice bowl’ in Japanese).

Ordering is done from a pick and point illustrated menu at the front counter as you walk in.  There are rice bowls as well as a couple of more expensive Bento options.  The restaurant is enormous with plenty of small tables as well as two very large share tables.  Each time I’ve visited, the place has only been half full so getting a seat or your meal shouldn’t be a problem. 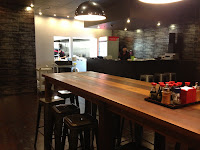 Meals are delivered rapidly to the table and on the most recent occasion we enjoyed Karage Chicken and Shoyu Ramen. Karage Chicken (fried chicken pieces) wasn’t my first choice. Not because I don’t enjoy it but because it seems a bit pedestrian but Anthony was keen so I ordered it to keep the peace.  Another large serve, with plenty of rice as well as a small salad garnished with a pert dressing.  The entire dish was drizzled in Kewpie mayonnaise.  I like Kewpie mayo but always think it’s odd to find on Japanese food as its not at all traditional, though of course nowadays it’s part of the staple diet.  Nothing amazing to write home about with this dish but certainly reasonable for around $11. 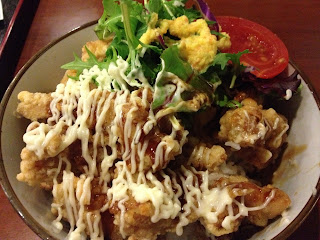 There’s a lot of competition over good ramen in the CBD.  Some are miso based, some made from pork or beef bones but the shoyu is soy based.  It was rich and savoury with plenty of slippery noodles, slices of rare beef, half an egg, wakame and fresh spring onions.  Very moreish and neither of us wanted to swap meals. 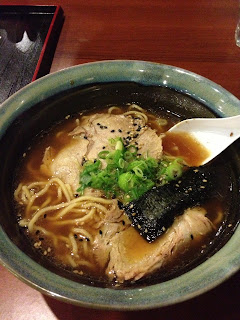 I was more than satisfied with Donburi and would be happy to swing past on my way over to Southbank in future.

Pro: Plenty of seating and a fairly decent ramen at the top end of town.
Con: A souless interior. They charge a high service fee for debit/credit card so bring cash.
Overall: There seems to be lots of complaints about the service in this place but on the three occasions I’ve been, I’ve had no problems.  People have also complained about ‘non authentic’ Japanese food.  Again, this is not a high class restaurant but a place to have a quick meal.  I couldn’t have been happier and will return.

So there you have it.  Three different ‘Japanese’ restaurants with a ‘same, same but different’ approach. WaraWara Izakaya is my choice of the three but it’s usually GI (geographically impossible) at lunch time so Ginga has edged it out as a reasonable lunch alternative down my end of town.