on August 7, 2013 by Fiona Ryan
Filed in: Brisbane, Restaurant Review

Today we visit a cafe that doubles as a vintage buyer’s haven. 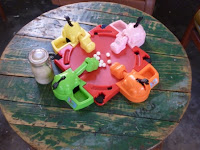 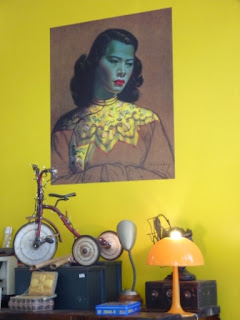 Vintage Kitchen & Vintage Closet is located at the very busy intersection of Creek and Cavendish Rd in Coorparoo.  Located in an old hardware store, Vintage Kitchen & Vintage Closet gives you the chance to dine in funky surrounds and then buy the piece of ironic artwork you’ve been admiring on the wall, at the end of your meal.  There’s an old Sega Master System on an equally old tele, a game of Hungry Hippos which really, really should be put in the farthest back corner to dull the noise and lots of bric-a-brac, clothing, accessories and ephemera at modest prices to encourage you to open your wallet again, even after the bill’s been paid. 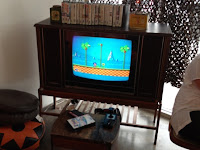 I’ve visited on a couple of occasions including one very memorable Saturday morning in January when ex tropical cyclone Oswald descended upon Brisbane.  Whilst the wind swirled outside and the rain spattered the large glass shopfront, we had two of the biggest bowls of coffee I’ve ever seen.  The mega bowl ($7.50) must be at least 1/2 litre and with three shots, sure to kick start your day.  Coffee is Toby’s Estate which many people think is too mild or weak.  It certainly doesn’t have the strong, dark palate of some beans but is mellow and pleasant enough to drink. 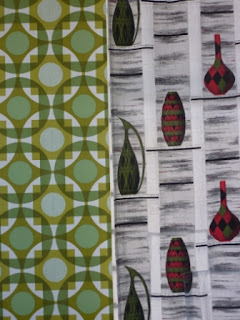 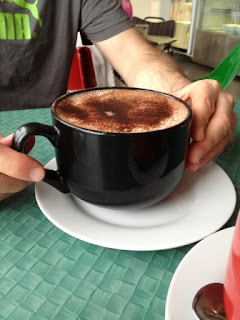 Another visit saw me dining solo so I decided to have a late breakfast dish from the large menu on offer until 2pm daily.  I saw several Eggs Benedict combos go past and in hindsight, I’d wished I’d ordered one of those but instead, I went for the Vegetarian Breakfast Stack ($14) w roasted pumpkin, baby spinach, fetta, avo and semi dried tomato aioli on organic sourdough. 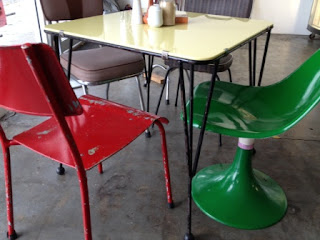 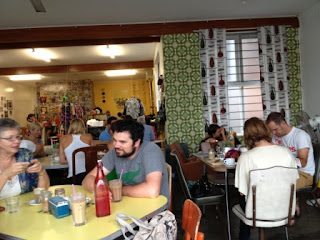 Despite the cafe being busy, the meal arrived quickly and was impressive in size.  Two thick slices of toasted sourdough had been topped with spinach, loads of roasted pumpkin and avocado.  The application of the pink, semi dried tomato aioli was a little over enthusiastic and this turned out to be an issue.  When I first tucked in, the fetta was a nice contrast with the sweet pumpkin and creamy avocado.  But the flavour of the aioli started to creep in and then dominate.  I like my sauces but this was far too strong and overpowering for the dish.  With robust tomato and garlic flavours and an extreme saltiness, it was not enjoyable.  And so much of it!  To be honest, it really tasted like they’d nipped over to Coles and bought a semi dried tomato dip, filled a squeezy bottle and decorated with wild abandon.  I’m not saying this is what the sauce was but it had the same effect. Others around me were polishing off their food so perhaps my meal was the exception but even after scraping off most of the aioli, I just couldn’t finish the dish.  I did mention to my waiter that I found the sauce overpowering and he listened with interest but I’m not certain that it will change anything on the menu. 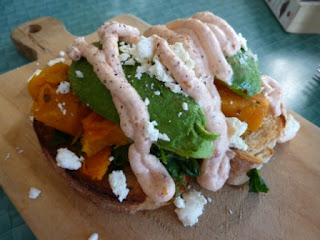 I’d return to VK&VC for coffee again and maybe even the simpler items such as Organic Banana Bread or Ham & Cheese Croissants but I’d be wary of ordering any items with ‘unusual flourishes’. 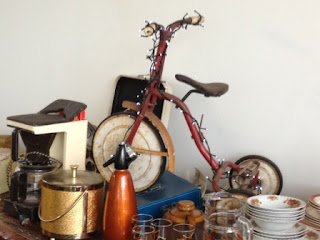 Technically, Vintage Kitchen & Vintage Closet could fit into my Local &/or General series as I can walk there but then it would have been a lost opportunity to include it in Vintage Week, wouldn’t it?