on August 8, 2013 by Fiona Ryan
Filed in: Brisbane, Restaurant Review

In this last Vintage Week post we visit a drink that many have heard of but few know how to make.

When I was writing the intro to Vintage Week, the words ‘old fashioned’ came up and that triggered the idea of writing about an Old Fashioned Cocktail.  I’d heard of an Old Fashioned in fact, I’d seen Don Draper knock back quite a few but in truth, I really didn’t know what it was.  I love cocktail culture and even have a Pinterest board dedicated to it so I decided it was time I found out.

An Old Fashioned is a whiskey cocktail and is one of the six basic drinks listed in David Embury’s classic book ‘The Fine Art of Mixing Drinks’.  Published in 1948, it is still in print and covers the underlying principles of cocktail which are categorised under ‘aromatic’ and ‘sour’.  An Old Fashioned is in the aromatic category.  Embury provides the basic recipe.

Method: In an old-fashioned glass, add bitters to simple syrup and stir. Add about an ounce of whiskey and stir again.  Add two cubes of cracked, not crushed ice and top with rest of whiskey. Twist lemon peel over the top and garnish with lemon peel and a maraschino cherry.

Yes, it does say 12 parts.  That may be the basic recipe but even the smallest amount of research will bring up all sorts of variations and discussions over the authentic Old Fashioned.  Sugar or a sugar cube is often added instead of the syrup and this seems to be the only acceptable variation that’s agreed upon.  Fruity additions are subject to enormous debate.  ‘Add orange.  No orange. There is no fruit in an Old Fashioned. The orange is essential.  Lemon peel is acceptable. Never a cherry (though I think they’d find it hard to argue with Embury)’.  Then there’s the liquor.  Bourbon or Rye Whiskey?  Don’t even get the cocktail fraternity started on technique.  Some muddle the sugar and bitters, others say they NEVER muddle as this is a ‘New Fashioned’.

So with that in mind, I tested a local bar on its Old Fashioned making prowess. 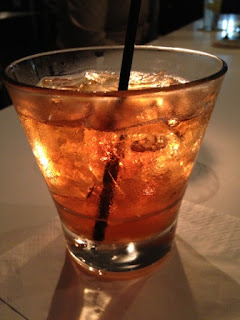 Era Bistro
When I asked for an Old Fashioned, the bar tender did a double take.  I encouraged him by saying it was a whiskey cocktail so he went to the cocktail book, looked it up and set to it.  The drink comprised muddled sugar and bitters, Maker’s Mark Bourbon Whisky, ice cubes (neither cracked nor crushed), maraschino cherry topped with soda.  When he went to ring it up on the register, the bartender did another double take.  The till was only set up for much more extravagant cocktails with numerous nips of spirits. He decided that the price was a bit rich for what was essentially a whiskey and soda so charged me the cocktail price but proffered the bottle and poured another free hand shot into the glass. Hard to argue with that.

For the record, the other five basic cocktails are a: Daiquiri, Jack Rose, Manhattan, Martini and Sidecar.  Some, such as the Martini, are true classics, others such as the Daiquiri have been hijacked and are a shadow of their former selves and some….well some are not as well known these days and just a little bit old fashioned.

Thanks for joining me for Vintage Week.  Perhaps we’ll do it another time.