on August 23, 2013 by Fiona Ryan
Filed in: Brisbane, Restaurant Review

Local &/or General is the title of a song by The Models. Not when they were in their chart topping phase but earlier on, in their edgy, urban grit phase, prior to James Freud joining. It’s a song that’s always stuck in my mind and it seemed like an appropriate title for this occasional series of reviews about very local coffee shops that I can walk to from my house.  This one’s on the outer limits of ‘Local’ as it’s a 45 minute walk but trust me, you need to do every one of those minutes when you see what’s in store. 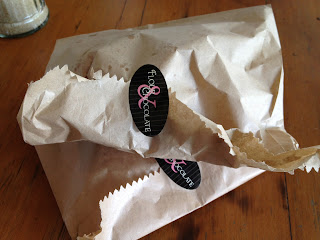 Flour & Chocolate is, like all good patisseries a very tiny shop full of delicious and tempting goodies.  People had raved about it and I knew it was close by but each time we drove past, I couldn’t spot it.  One Saturday morning I could take it no longer and went in search of deliciousness. There it was, tucked away in a set of nondescript modern shops between a dentist and physio.  It was like the scene from Seinfeld where Elaine & Jerry go to the bakery to buy the babka.  The place was jam packed with people making their choices and you had to hope that someone else wasn’t going to buy the last of something you had your eye on.  To be fair, there were several staff behind the very cramped counter and they were extremely efficient in their service so the wait was not too long.

Where to begin?  Because Flour & Chocolate is a bakery, there was a large range of crusty sourdough and ciabatta loaves to choose from.  They were heavy for size and made a pleasing hollow sound when you tapped them on the base. But we weren’t there for the bread (though I do grab a few rolls). We were there for the sweets and, so many to choose from.  I think the true test of a patisserie is the Almond Croissant – it needs to be flaky on the outside with a toothsome crunch and moist on the inside with good quality almond paste. Anthony was bedazzled by choice and the madding crowd so I selected for him – another classic, a fruit Danish. I chose raspberry and it was good to see discernible chunks of raspberry amongst the fruit sauce and custard.  Both fine choices and both polished off with a coffee quick smart. 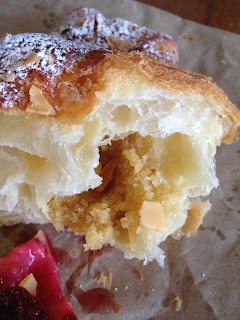 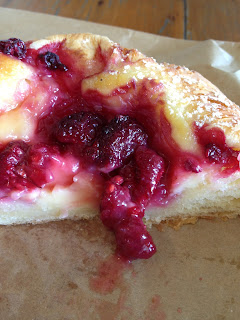 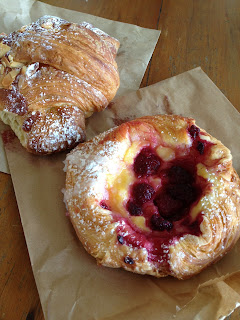 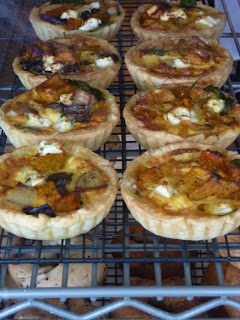 The next visit was a weekday and it was just as busy.  It was Friday, which is Brownie day so I chose the special ‘Flourless Turkish Delight Brownie’ and, a Sweet Onion and Black Sesame Bagel.  I wouldn’t generally go for a brownie but as they had their own special day of baking dedicated to it, I thought I couldn’t go far wrong.  Moist, dense, rich and incredibly sweet, there was the expected rose flavour plus some small chewy pieces of Turkish Delight.  It was too much for me and at only $4 for a large brownie, you could easily split this four ways and share it amongst friends to enjoy it with.  If you aren’t keen on Turkish Delight, there were plenty of other flavours on offer including a Blondie.

And so on to the bagel. WHAT. A. BAGEL! This bagel was so delicious, it deserved that capitalisation. Small, dense, chewy – just as a proper boiled and baked bagel should be. I had foolishly kept it back to share with Anthony. We split and toasted it with butter.  But the flavour….it indeed tasted of sweet onion and so more-ish.  I won’t be so generous when I next go back and I also won’t be so foolish as to buy only one.

There’s plenty more to pick and choose from.  Pan Au Chocolate, petite little tartlets, Banoffee doughnuts, savoury tarts and the elusive Cronut which I’ve yet to meet as it’s baked on Thursdays.  As you read this, I’ll be traipsing back for some more of those bagels. If they don’t have the Sweet Onion, I’m sure they’ll have some equally delicious flavour.  Flour & Chocolate is takeaway only. They don’t sell coffee so the best thing to do is take your goodies home or sit in the gutter and elegantly devour them. I definitely think this one is worth the 45 minute walk!