I Was Standing on the Corner

on August 31, 2013 by Fiona Ryan
Filed in: Brisbane, Restaurant Review 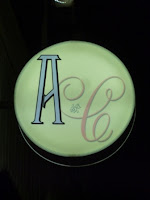 Since Alfred & Constance opened 18 months ago, I’ve traipsed past it with alarming regularity on the way to and from my dentist, just around the corner.  I often take a look at the menu and a peek into what’s happening but usually have a mouthful of anesthetic or a dentist bill in my hand so the timing’s never been right to visit.  A few weeks ago, when I was invited* to try out some specials on the A&C menu, I journeyed there safe in the knowledge that my dentist doesn’t do late night trading.

It was a balmy late Winter evening as we sat on the deck between the two converted workers cottages that comprise A&C. Much has been said about the eclectic decor so I was surprised just how good it looked. I was expecting that it may be twee, full of fake vintage and forced quirkiness but in fact, the ephemera is genuinely interesting and quite unique so it’s an engaging space to dine in.  As it says on the website: ‘Plenty to do & see at A&C’. 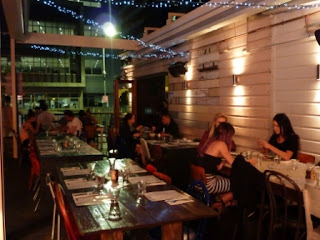 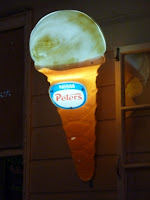 This is casual, pub style dining and the menu follows the usual mids and mains as well as share plates and sides. There was also a specials menu, showcasing seasonal produce. There’s a heavy focus on meat but enough to suit other tastes and diets. We chose a couple of salads, the fish and chicken specials and with a suckling pig on display in all its glory in the open kitchen it seemed churlish not to select it at least one pork dish.  We doubled down by choosing Memphis Pork Ribs w Corn Bread (16.90) and a portion of Roast Pork w Applesauce served by weight (250g – $32).

The ribs were lip smacking, not too sticky or messy and I selfishly ate more than my fair share of these as they are an absolute fave. The roast pork held promise but to be honest was a little disappointing.  The meat was dry and whilst I enjoyed the crackling, others found it over salted and couldn’t eat it. As one of the more expensive (and no doubt popular) dishes on the menu, this was surprising.  More success with the grilled chicken which was juicy and flavoursome, sitting atop crushed potatoes and piled high with salad spiked with dill. 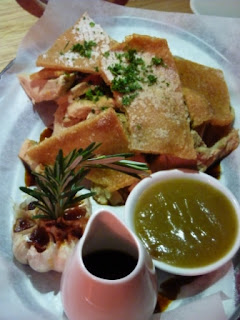 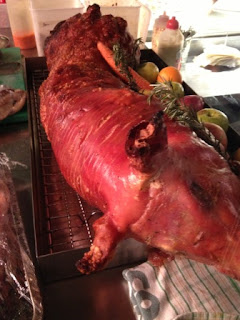 The special of Beet Salad w Gorgonzola & Candied Pecans was a knockout in terms of that classic flavour combination of sweet and salty.  We would have readily ordered a plate each if we’d known how good it was going to be. The salad of Lentil, Celeriac & Mint w Roasted Hazelnuts ($16) was earthy and with the mint tossed through, was refreshing on this particularly warm evening.  This salad would make a tasty lunch if you were looking for a meat free option. 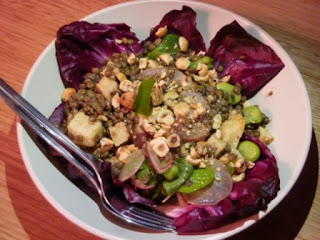 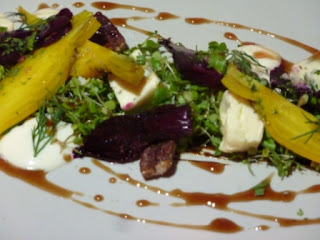 As good as those ribs were, the desserts were a knockout.  There was the standard ‘pub style’ desserts with options such as Sticky Date Pudding and Chocolate Fondant – both to be commended by the way, but what makes the desserts a knock out is the enormous range of cakes available as a ripple effect of A&C owning the newly opened Chester St Bakery.  So many great choices and baked fresh daily. I spent a long time umming and ahhing over those cakes but in the end I went for the Lemon Polenta Cake with Lemon Curd.  The Peanut Butter Cheesecake was also something to write home about with a delicious nutty, caramel topping.  If that wasn’t enough, there was also a yoghurt soft serve selection with virtually unlimited sauces and mix in options. 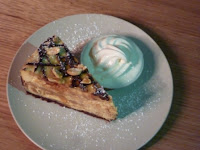 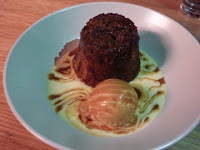 There seems to have been a few complaints on the internet about A&C. Complaints about basic food and service.  That’s not what I experienced on the evening I visited.  Whilst it’s essentially a pub, there has been a lot of attention paid to the menu. A real effort has been made to source local meat, fruit and vegetables, bread and cakes are baked fresh daily, the specials menu showcases seasonal produce and there’s plenty of fresh flavours to keep you interested   Apart from the suckling pig by weight, most dishes come in around $15 – $25 but there’s some cheaper snacks too. And if your not interested in a meal, just visit for coffee and dessert or head straight upstairs to the Tiki Bar.  As an added bonus, for those who are eating at A&C, they can park in Valley Metro (old Valley Centre Plaza) and have their parking validated by the restaurant.  I have to say A&C is right up my alley. 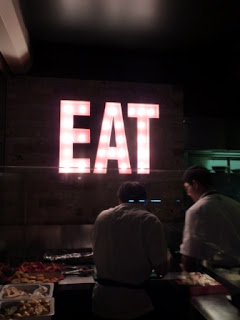 Next post: …And All The Lovely Extras – Honey Soy Walnuts