on October 4, 2013 by Fiona Ryan
Filed in: Brisbane, Restaurant Review

There are times when you have a magical meal experience that lives long in your memory and equally long on your credit card. Then there are other times when you’re looking for a more budget friendly option. It could be a big family get together where food is secondary to catching up or, a quick bite after a movie.  In the space of a week, we ended up visiting not one but two Italian restaurants to meet with friends and family.  Both cheap and cheerful, nothing flashy about the decor or showy about the food but deeply satisfying in terms of taste and size of credit card transaction. 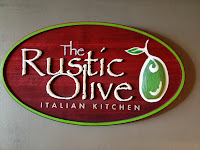 The Rustic Olive is located on the Esplanade in Redcliffe. We were meeting to celebrate a birthday and this was a good halfway point between Brisbane and Caboolture.  I had actually been to the Rustic Olive in a previous incarnation but it became so popular that it moved into larger premises a few doors up.  We had booked but when we arrived, no table had been set. They weren’t too perturbed as there were plenty of tables to accommodate us inside but it was a bit of a shame as it was such a glorious day outside with a wonderful view across to Moreton Island. 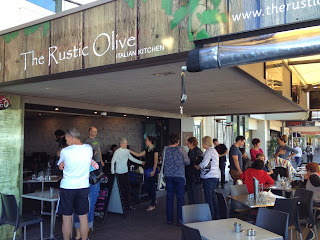 The menu is extensive to say the least with over 100 dishes to choose from. There are a myriad of pizza and pasta combinations as well as typical beef, chicken, veal mains, salads and garlic breads.  True, many of the mains use the same sauces as the pastas and I think they are also splashed liberally on some of the pizzas but if you couldn’t find something on this menu, you’re just not trying hard enough. 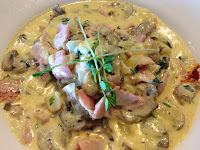 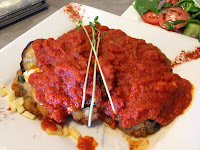 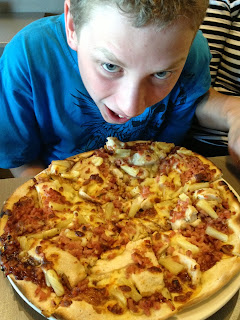 I had misgivings that as it was so busy and we were a largish group that there may be some delay or, the orders may not be correct but this wasn’t the case.  The meals arrived very quickly and, they were huge.  After being dazzled by the enormity of our dishes, we set about trying to make a dent in them. We chatted and shared, swapping stories and food in the bustling restaurant.

There’s nothing stylish about the plating or unique about the ingredients but you could hardly complain about the value for money. This is the place to bring your teenage son. I do imagine though that there’s an awful lot of food waste.  Happily, The Rustic Olive allows you to take away the left overs but they could serve 3/4 or 1/2 sized meals and still charge the same price and no one would complain.

Gino’s
There’s something about Gino’s that lures me over to the other side of the river. I’ve only been once or twice but every time someone suggests a quick dinner over that side of town, I suggest Gino’s in Hamilton. Most people just smile and book somewhere else. I think they think it’s terribly old fashioned with its logo of a hand pouring wine into a glass, a logo that befits a restaurant that’s been going for 30+ years. They’re right of course. It is old fashioned in the sense that the menu really hasn’t changed but it must be doing something right as it’s still go strong. 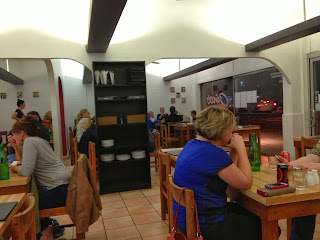 Four of us arrived early on a Saturday evening and they were easily able to fit us in before the bigger groups starting arriving. At some stage they’ve knocked through to the building next door and as we were seated, we could see the combined families of the owners siting at a large table at the back. Grandparents, children and cousins all enjoying a quick meal together before the things started kicking off for the evening.

Choices are the classic offerings of pasta, pizza, veal and chicken as well as simple salads and frozen desserts. Between us we ordered a pizza, Schnitzel and Spaghetti, classic Veal Parmiagana and Veal Scallopini Funghi – all mains are priced between $22 – $25. The meals arrived quickly but I think we were wise to get in early as the tables started to fill and the demand on the large kitchen increased. The size of the Schnitzel and Spaghetti had to be seen to believed. It was enormous! Other meals were just as big and two came with a small side salad. This is definitley a place to come if you want an easy, relaxed night where you can laugh, let the kids wander around and know that you’re going to be well fed. Simple flavours, big portions and small prices keep the crowds coming in. I hope I don’t leave it as long before my next visit. 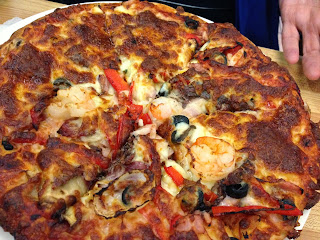