on October 19, 2013 by Fiona Ryan
Filed in: Brisbane, Restaurant Review

If it doesn’t rain, it pours! I wrote last week about new lunch spots opening up close by and here’s another. 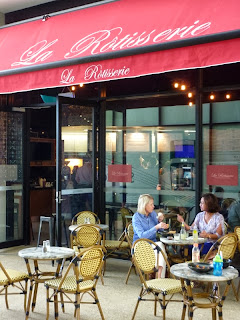 The drought in the wilderness officially ended last week when I went to lunch with Mel – only the second weekday lunch I have had with a friend in 2 years!  Gasworks Plaza opened a few weeks ago and there’s not a day that’s gone by that I haven’t visited. I don’t actually do anything except maybe buy an apple from Woolies or have a look in the The Standard Market Company but the idea of having real shops within walking distance of work is just too tantalising for words.

I’d seen the words ‘pulled pork’ in a tweet and was drawn like a moth to a (bbq) flame.  We met at La Rotisserie, one of a handful of restaurants and cafes at the Plaza. As the name implies, La Rotisserie specialises in spit roasted and barbequed meats.  You can have the meat of your choice in a roll or a bowl with a side garnish of coleslaw for around $11.  We went for a Chicky and a Piggy and a side of chips.  You order at the counter and they deliver to your table a short while later. 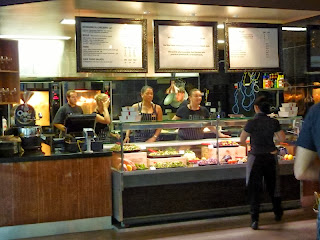 I was expecting a long crispy baguette or some type of bun but the bread was actually Turkish. I like Turkish was it wasn’t the best match for the moist meats and salad that needed a sturdier vehicle and it certainly should have been toasted.  The chicken was moist but we both agreed that it really just tasted like any other BBQ or roast chicken, shredded with some mayo. The pulled pork was tangy and moist and had the better flavour of the pair. There was a healthy serve of freshly made coleslaw sitting inside the bread that was nice and crunchy though the red onion was competing with the rotisserie. These sandwiches were fresh and flavoursome but nothing exceptional. 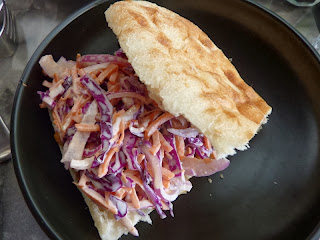 There’s no doubting the freshness of the ingredients and attention to quality with free range and organic meats. If you’re not into roasted meats, there’s some good looking salads if you’re that way inclined (though I doubt you could fit a roll and salad) and you can also buy chooks to go. 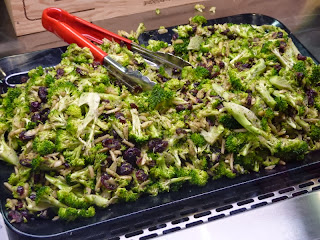 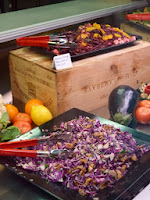 Whilst $11 for a roll sounds like a lot to me, I think a $10 lunch is probably the going rate now days. Still, I thought the pricing structure was on the steep side. With rolls at $10 – $12, salads at $10, sides at $7 and even sauces at $4 each, that’s once pricey lunch. There’s a Mexican just around the corner so I think some roll and salad or roll and side combos might draw a larger crowd.