on October 29, 2013 by Fiona Ryan
Filed in: Brisbane, Restaurant Review 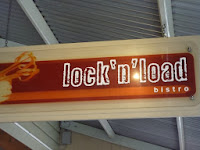 “I’ve been to Lock ‘n’ Load Bistro a few times for breakfast but never for dinner.” was the common refrain of those I spoke with in the past few days and something Lock ‘n’ Load obviously intends to address. They’ve refreshed their menu and added a range of tasting plates that are popular with crowds and those after lighter options. Last Tuesday, Anthony and I visited* to give the menu a whirl.

For those who haven’t been, LnL is a long narrow space with a bar at the front, tables stretching out to the back and a large lush courtyard. You could be a world away from West End when you’re sitting in that courtyard and it’s incredibly popular for brunch but on this occasion, after a breezy evening, we chose to sit in the snug interior. There was a cool little jazzy accoustic duo in the front bar, playing a bit of this and that and adding to the relaxed early week vibe. 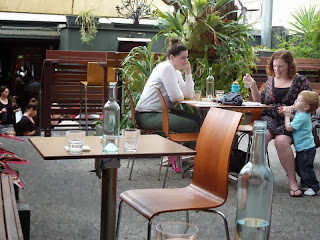 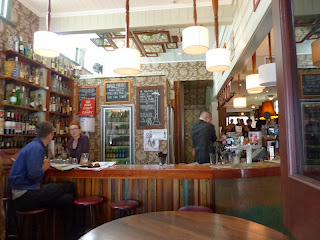 The ‘Tasty Morsels’ sharing options had lots of choices with 1 for $12, 2 for $20 and 3 for $28. I opted for the Beef Cheek Croquettes w Pickled Onion & Parsley and, Feta and Chilli Stuffed Mushrooms w Pistachio & Quinoa Crumb.  Both of my dishes needed work. The Croquettes tasted fine with moist, shredded beef but were far too dark on the outside as a result of the oil being too hot for such small croquettes (they look lighter than they were due to the flash from the camera). I saw others go past with the same colouring. The Mushrooms were cleverly crumbed in crunchy quinoa but were under seasoned and had no taste. I would have though the feta and chilli would have perked up the flavours but I couldn’t detect them. I must admit that as a dish of Confit Fried Chicken Drummettes went past I had buyer’s remorse for not choosing them myself and they seemed to be enjoyed by fellow diners. 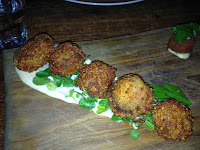 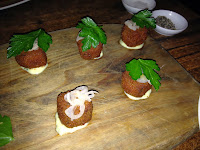 We fared much better with the main of Peppered Cape Grim Sirloin w Blue Cheese Butter ($32) and a side of Sweet Potato Chips (not the ones in the photo below, these came with the steak and were good too). The steak was perfect. Served exactly how it was requested (medium), juicy, tender and flavoursome. I have spoken before about the many, many disappointments of steak dinners I have had. In my books, a good steak truly is the test of a decent kitchen and chef who knows what they’re doing and, LnL delivered the goods. The Sweet Potato Chips w Aioli ($9) were quite honestly the best I’ve had. Sweet potato fries can be notoriously hard to cook. They have a high sugar content so burn easily and there’s nothing more unpleasant than a basket of fries with singed edges. These were delicious. Light, crisp, not overly sweet, seasoned well and, made on the premises rather than out of a packet. Great job! 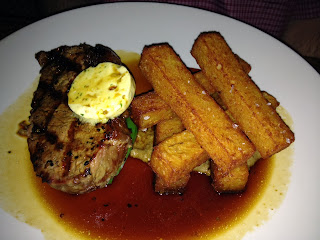 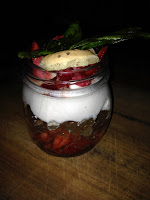 We shared a dessert of Champagne & Strawberry Trifle with Champagne jelly, some nice little freeze dried pieces of fruit and candied basil. ($12) and it was all over, red rover within an hour of sitting down. The joys of Tuesday night dining.  Service was attentive and pleasant and everything was as it should be when we went to pay.  There’s some more finessing on at least some of the items on the Tasty Morsels aspect of the menu but all in all, Lock ‘n’ Load is definitely worth a visit outside breakfast hours.