on November 5, 2013 by Fiona Ryan
Filed in: Brisbane, Restaurant Review

You know how it is. You go to Expo 88 and eat your way through the pavilions with alarming regularity and then, you barely set foot in a restaurant in the revitalised South Bank Parklands site over the following 30 years. Sure, I’ve nibbled around the edges of Little Stanley St and chomped on the end of the newly developed River Quay but on the whole, South Bank has been pushed to the side of the plate. Why? Perhaps it’s because it’s such a bustling precinct where there are generally big crowds or maybe I think the restaurants seem to cater exclusively to tourists with burgers and ice creams or maybe a bit of both. 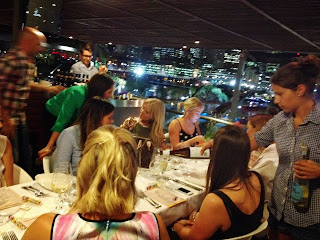 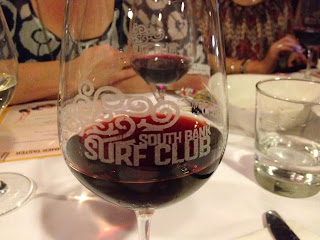 Anyway….a couple of weeks ago a bunch of Brisbane food bloggers and tweeters were invited* to a TwEAT Up at The Surf Club at South Bank to check out the new Summer menu. The Surf Club is right in the heart of South Bank, smack bang in the middle of tourist territory, overlooking the beach^. In the evening it has fabulous views over to the CBD and down along the river promenade. A very pleasant outlook for a group dinner so if it’s open, ask for a table on the top level. As a group we were sharing entrees and then choosing a main and dessert from a selection. With a name like The Surf Club, of course the focus is on seafood but there are other dishes with chicken and beef as well as a sprinkling of vegetarian options. After a quick welcome to the group the first plates were delivered. Moreton Bay Oysters Rockefeller (6 for $23), Chunky Tomato Bruschetta w Goats Curd & PX Vinegar ($14.50) and, Smoked Sardines Soldiers w Herb Mayo ($18). 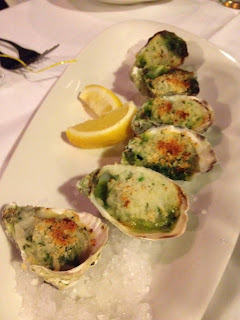 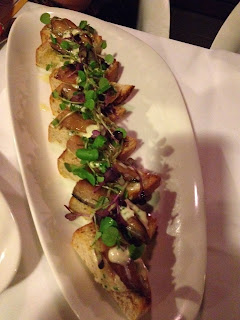 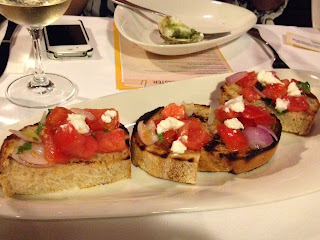 Most people have heard of Oysters Rockefeller but what exactly are they? Created in 1899,  they were named after John D Rockefeller, the richest man in America at the time. The oysters are served on the half shell, topped with a rich buttery herb sauce (hence the name Rockefeller) and baked or grilled. I enjoy most seafood but oysters are one of the few dishes I prefer to go against tradition and eat them cooked rather than raw. So to my palate, these were very enjoyable. The Sardines were like no others I’d tasted before. Smoked and served on sourdough toast slices. We had a great conversation about memories of childhood meals of sardines in tins mashed on toast and everyone agreed these were infinitely superior. I had more than my fair share. 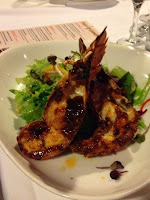 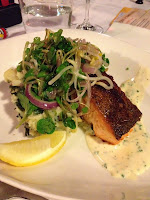 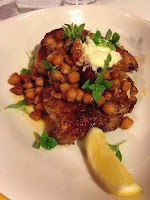 I ummed and ahhed over my choice of main and went with Thai Marinated Char Grilled Moreton Bay Bug ($33.50). My dinner partner ordered Pan Roasted 1/2 Chicken w Chickpea & Chorizo ($27). The bugs had a delicious scorched caramelisation on them and sat atop a salad of greens, cucumber, shallot and mango with a nuoc cham dressing. I ate them separately to the salad as the nuoc cham was a little strong for the sweet bug meat.  The bugs were on the small side and I wonder if another half would have made a more substantial meal?  The chicken had been boned and flattened before being pan roasted and placed on top of the chickpeas. It was incredibly moist which if often hard to achieve, with chicken breast in particular, and the balance of flavours worked well. Others tried Prosciutto Wrapped Salmon (though no prosciutto wrapping on this occasion) and Flinstones sized BBQ Beef Ribs (moist but not quite falling from the bone I was told). 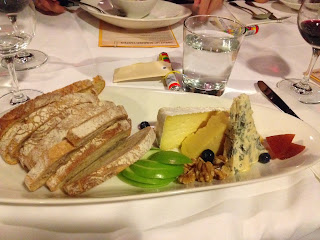 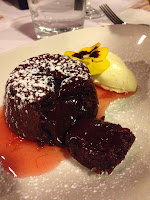 From the dessert selection, I chose the Australian Cheese Selection which turned out to be a very large plate including a blue, triple cream brie and a cheddar with apple, quince paste and hand made crispbreads. There’s nothing worse than a cheese plate with stingy portions of bread or crackers so the generous serve on this board was very welcome though in truth, for a single serve, the plate was far too big. Get this one to share for the table. The Dark Chocolate Fondant was a popular choice at the table and the one alongside me was as a fondant should be – warm and cakey with an oozing centre. It was a decent portion too but barely touched the sides!

The Surf Club is a relaxed venue in a fabulous location.  There’s something for everyone with plenty of faves such as Salt ‘n’ Pepper Calamari and a decent ‘fisherman’s basket’ styled Club Catch. Pricing is quite reasonable with mains between around $25 – $35 and given the view (which is particularly spectacular at night) this would be a good option for family lunches or dinners or, a meal with mates before bar hopping along Grey & Little Stanley Sts.

^For those of you who have never visited Brisbane, we have a free, man made beach right in the centre of the city complete with palm trees, filtered salt water, white sand and lifesavers. That’s why there’s all of those tourists! More info here: South Bank Parklands

*TIFFIN attended The Surf Club TwEat Up as a media guest of The Press Garage.