on November 12, 2013 by Fiona Ryan
Filed in: Brisbane, Restaurant Review

Local &/or General is the title of a song by The Models. Not when they were in their chart topping phase but earlier on, in their edgy, urban grit phase, prior to James Freud joining. It’s a song that’s always stuck in my mind and it seemed like an appropriate title for this occasional series of reviews about very local coffee shops that I can walk to from my house.

If there’s one thing I love more than Roti Canai, it’s Dosa. In the past I’ve written about my pursuit of them near and far so who would have thought I could find near perfect versions of both just around the corner from me? A few weeks ago I went for a walk to Samuel Village shopping centre and after I’d enjoyed a cup of coffee, strolled past the assortment of shops. Tucked in the corner was Mamak Tandoori House, a local Indian Malaysian diner that specialises in serving Dosa on weekends. 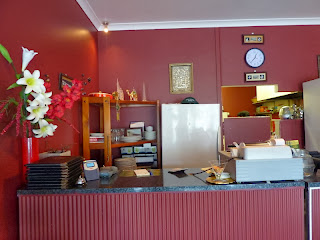 It’s a small restaurant with half a dozen tables inside and a couple on the footpath. We returned on a Sunday just as a larger table were leaving and whilst it wasn’t entirely full, the one waiter was pushed to the limit taking orders, delivering meals and replacing water.  When the waiter arrived at our table, there was no need for us to delay proceedings by perusing the menu. We ordered straight off the Weekend Specials that are displayed in the entry. One Roti Canai and a Masala Dosa.

The only waiting was the time it took to prep the breads and before we knew it, there were two delicious dishes being delivered to our table, with admring gasps from fellow diners.  It’s the Dosa that draws the admiring glances. An enormous disc of fermented rice batter cooked into a crispy pancake, filled with a spiced potato curry. The Dosa comes with a  range of accompaniments including a thin sambhar and a delicious fresh red chutney that looks as fierce as Shiva’s eye but is in fact sweet and rich, taking it’s red colour from reduced tomato rather than chilli. 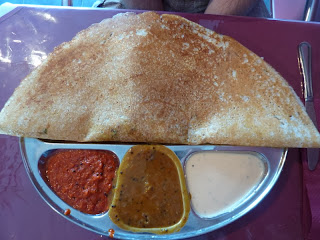 There is nothing that can compete with the crunch of a freshly cooked Dosa as you spoon forkfuls of the potato curry into piece of pancake and fold it over itself before popping it into your mouth. Except maybe Roti Canai (Chanai). Roti is a bread with many layers that are cooked on a griddle and then ‘boxed’ by the cook to make them puff to reveal the many layers. Canai is a small serve of curry that accompanies the Roti – prefect for dipping. On this occassion it was a chicken curry and though it had a bit of a kick to it, we polished it off in double quick time. 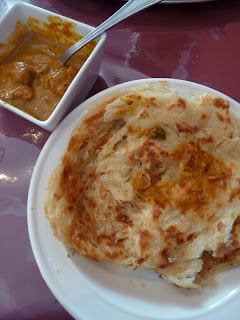 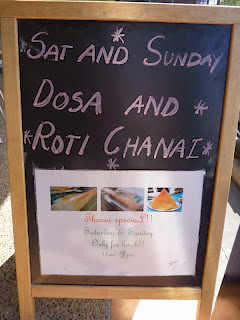 There’s nothing fancy about Mamak Tandoori House but it’s a pleasing sign to see the local Indian community dining there and enjoying what was no doubt a childhood treat. This place is a secret that I should probably have kept to myself!