on December 17, 2013 by Fiona Ryan
Filed in: Miscellaneous

This is my last post for the year and last Random Recipes for the year. At such a busy time of year, Dom from Belleau Kitchen has let us off the hook by challenging us to ‘Dare to Bare’. Rather than a recipe, we have been asked to photograph our food cupboards and pantries. To put on display the order and disorder that’s behind those magic meals we produce each month. Thanks to Dom for being a great host and for coming up with so many clever themes to force us to revisit our cookbooks and dig around in our cupboards and freezers.

These photos are a true reflection of my cupboards. No food stylists were harmed in the creation of this post. 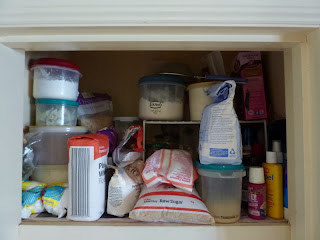 It’s all about the dry goods. Flours, sugars, couscous, quinoa, freekah and bulgar wheat – you’ll find them all here. Also the lesser used ingredients such as dessicated coconut and semolina, shoved to the back. Mosquito repellent, within handy reach is also stored here. There are a lot more bags of flour and sugar than I would normally have but, it’s that time of year…. 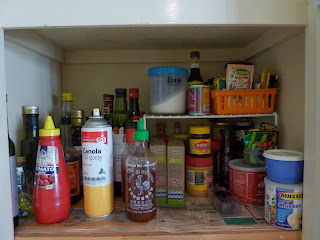 The ‘everyday shelf’. All of the sauces, vinegars (of which there are many), oils and spreads including of course Vegemite reside here. Canola cooking spray is always at the front and I’ve ditched the lid as it didn’t fit properly. The Sriracha Chilli Sauce is a must have staple. There’s a wire stand tucked in the back where all of the baking ingredients are stacked – baking powder, caster sugar, cooking chocolate, vanilla, yeast, flavourings and colourings. Muesli bars also sit on this shelf. I buy ‘Be Natural’ as they are relatively low in fat and kilojoules and occasionally I can even fit one in to my 5:2 calorie limit. 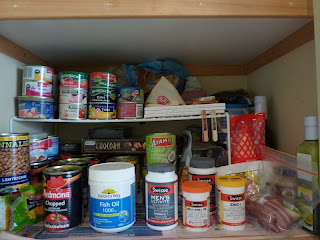 Tins. Lots of tins. Beans, beetroot, coconut milk, evaporated milk, tuna and tinned tomatoes. I only use Ardmona. Not only are they Australian made, I think they have the best flavour. I tend to use crushed tomatoes rather than chopped as the consistency is better. They cost far more than the imports but are well worth it. When it comes to beans, lentils and chickpeas though, I only buy Annalisa, from Italy. They cost about the same as the other brands and trial and error has shown that these are the best of the bunch. 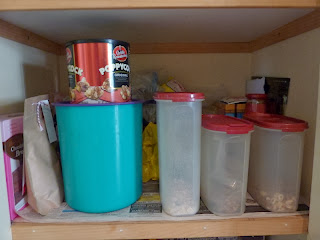 Cereals and biscuits at the front. The large green biscuit barrel was a throwout from Tupperware. Apparently not everyone was so keen on the aqua and purple combo so I got it for a song. I also store opened pappadums in a zip lock bag in there, to keep them fresh. Behind the cereals are noodles – egg, rice, glass, soba. You can’t live in Australia and not have noodles in your pantry. There’s also dried mushrooms, dried black fungus, nori sheets and a couple of pouches of heat and serve Palak Paneer for when the spirit is flagging or time is short. 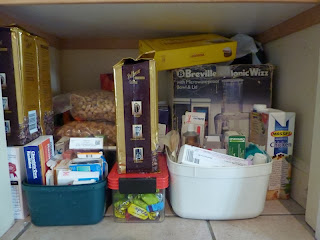 This is where I store an emergency tetra brick of milk, sometimes bottles of soda or tonic water and extra ground coffee – I favour Vittoria for plunger. We keep our medicines and tablets in a couple of ice cream containers. Things you ‘take’ in one, things you ‘apply’ in another. The main resident in this part of the cupboard is my 30 something Breville Kitchen Wizz food processor. It’s still going strong but is a bloody pain in the neck to drag out to use. 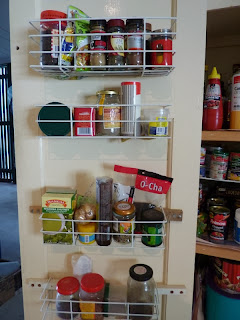 My handy husband attached small shelves so I would have more space. I keep a good deal of my spices in a large container in the fridge as the heat in Qld makes the volatile oils dissipate very quickly and you end up with tasteless powders and seeds. Having said that, I can’t fit them all in the fridge and there are some high use items that have enough turnover to stay in the cupboard. Cumin (seeds and powder), tumeric, cinnamon, white and black pepper, sumac and garam masala. I also store dry pulses I use frequently such as lentils and pearl barley and odds and ends such as cup-a-soups and mystery items from the Asian grocer.

This is certainly not the Pantry of my Dreams. My pantry is a former broom cupboard that I had a builder install shelves in, when we moved in 12 years ago. It’s the pantry of a very frustrated cook.  But if I build it… Yesterday I rang a builder to start the long and no doubt fraught process of building a new kitchen. I have two things on my wish list. A double oven and a large pantry. Stay tuned.

Thanks for reading my posts during the year. I hope you’ve enjoyed them. TIFFIN is taking the traditional Christmas break but will be back in 2014. TIFFIN is also doing some housekeeping and will be moving to a new self hosted website with some new features she has been after for quite some time. Stay tuned.