on January 11, 2014 by Fiona Ryan
Filed in: Brisbane, Restaurant Review

A few weeks ago I was invited* to check out the new Garden Grille menu at The Glen Hotel in Eight Mile Plains. Ahhh…..The Glen. I have fond memories of it. Just down the road from my parent’s house, it was where I went to my first pub concert. Not my first concert mind you (I was a seasoned professional by grade 9) but my first concert in a pub. An actual pub! It was on a week night. I may have been underage. I was there with all the other super cool New Romantics from the Southside. We were there to see a fabulous new, yet unsigned band that Molly Meldrum had been touting. A little band called Pseudo Echo. There was Jenny, Jenny’s brother David and I, along with maybe 30 other young moderns. Pseudo Echo appeared to polite applause and launched straight into their only single, ‘Listening’. Rookie mistake. Ah, yes. Good times. Good times. So you can imagine, I was very curious to see how The Glen had fared in the past *ahem* 30 plus years.

The restaurant is at the back of the sprawling complex that has been perched on the old highway in one form or another since 1865. Once a key staging point for Cobb & Co coaches between Brisbane and the Gold Coast, on this particular night, it was a key staging point for large family and work groups celebrating Christmas. Not one of them has worn their suede winkle pickers to the party. How disappointing. The room was spacious and airy with wooden decking and plastic curtaining that can be opened to bring the outside in and heighten the ‘beer garden’ feel on balmy spring and summer days. We arrived just as the heavens opened with a spectacular pre-Christmas storm so on this occasion the walls were zipped tightly shut and whilst we were entertained with the lightening show, we remained dry and comfortable. 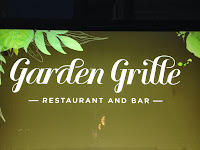 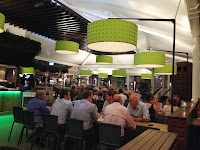 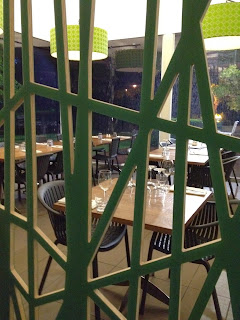 The Garden Grille menu has a wide range of steak and seafood options, some modern favourites such as ribs and salmon and a wide range of tasting plates to get the party started. And that’s just what we decided to do by ordering a mix of 3 sharing plates for $21.90. There was plenty to tempt us with oysters; scallops; and, mushroom crostini but we opted for a mix of Panko Sesame Chicken w Wasabi Aioli, Salt & Pepper Calamari and Peking Duck Spring Rolls. Three sharing plates turned out to be quite a lot of food. All were enjoyable with the wasabi aioli a clever addition to the chicken. Without a doubt, the calamari was some of the best I have had in an eon. Prepared with fresh squid, it was tender beyond belief and oh so more-ish. A real treat after many poor rubber band imitations in beer gardens across Qld. Well done Garden Grille. 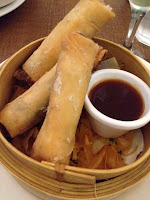 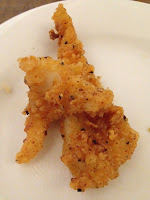 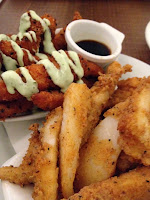 I find it hard to resist ribs when they’re on the menu but used all my will power to decide upon the 70 day grain fed Pork Rib Cutlet ($28.90). Then, with very little convincing by Jason, the Restaurant Manager, I changed my mind and went with the Smoky BBQ Baby Back Ribs ($32.90). How glad I was when those ribs arrived. It an enormous slab that drew admiring glances from the large group of dudes at the next table. I tucked in with my hands, because that is how ribs should be enjoyed. It was pleasing to have been provided with a large finger bowl filled with warm water and slices of lemon, as well as plenty of serviettes. Anthony on the other hand daintily nibbled on a rib with a knife and fork. Surely he can’t have enjoyed it without the sticky fingers? The pork ribs were tender though not falling off the bone with plenty of smoky BBQ sauce for the chips (though I only had 3). Of course, most of a rib serve is bone but still, after the big entree, they defeated me. 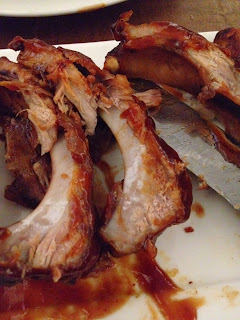 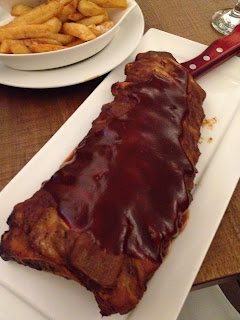 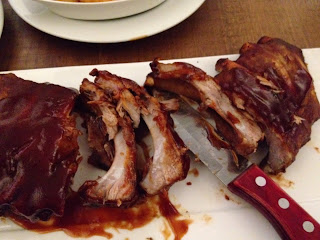 Anthony’s 250g Diamantina Gold Rib Fillet ($32.90) was cooked as ordered, which is as you would expect in a steakhouse but as regular readers would know, the steak you order is rarely the steak you get, particularly in steakhouses. There were steak toppers that seemed very reasonably priced such a Grilled Moreton Bay Bug for $9.90 but he decided against additions. Anthony had ordered a Dianne sauce and sensibly asked for it on the side. It had a weird sweet taste and far too much Worcestershire or similar. It was not enjoyable so stayed in the jug, not on the steak. A dud note in an otherwise delicious meal. 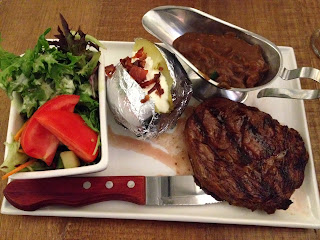 Usually, after such a large meal I wouldn’t order dessert but the Orange Fritters ($11.90) sounded intriguing and not a typical pub dessert. They were good. Very good. Small puffs of ricotta dough with a sticky orange glaze, they were a light and fluffy and showed a very deft touch in their preparation. The Glen has been able to lure Executive Chef Patrick Carlos from that meat palace, Cha Cha Char, to oversee the kitchen at the Garden Grille. The menu is essentially a steak restaurant menu but highlights such as the calamari and the fritters show that there’s some hidden gems and unique choices in there too.  With Australia Day fast approaching, an afternoon at The Glen with a steak and a jug of beer would be a suitably patriotic option. 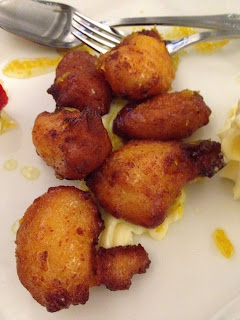 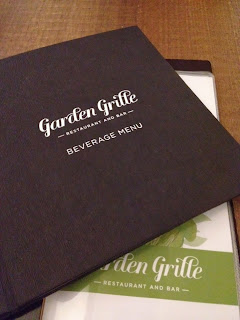 The hotel has been owned by the same family since 1960 and as I wandered around after dinner, I could see traces of the old function room where we would have watched the band and thought I could hear the echo of tinny keyboards. Though the shoulder pads and bleached fringes are long gone, there are still plenty of fond memories and a vinyl single or two still lurking in my collection.

TIFFIN is on the move! If you are a regular visitor, please make sure you have subscribed via email so I can take you with me to my new location. If you are in the TIFFIN Fan Club via Google, please also subscribe so I don’t lose you!