….speaking of butchers…. Last week I wrote about my local butcher shop. Whilst it’s local to my house it’s not actually close to where I spend much of my time, which increasingly seems to be Canberra in the service of our great nation’s public. This makes it difficult to shop for meat and groceries. Luckily, Meatcart got in touch with me, offering* a sample pack and introducing me to the world of ‘online meat shopping’. Who’d have thought such a thing even existed? 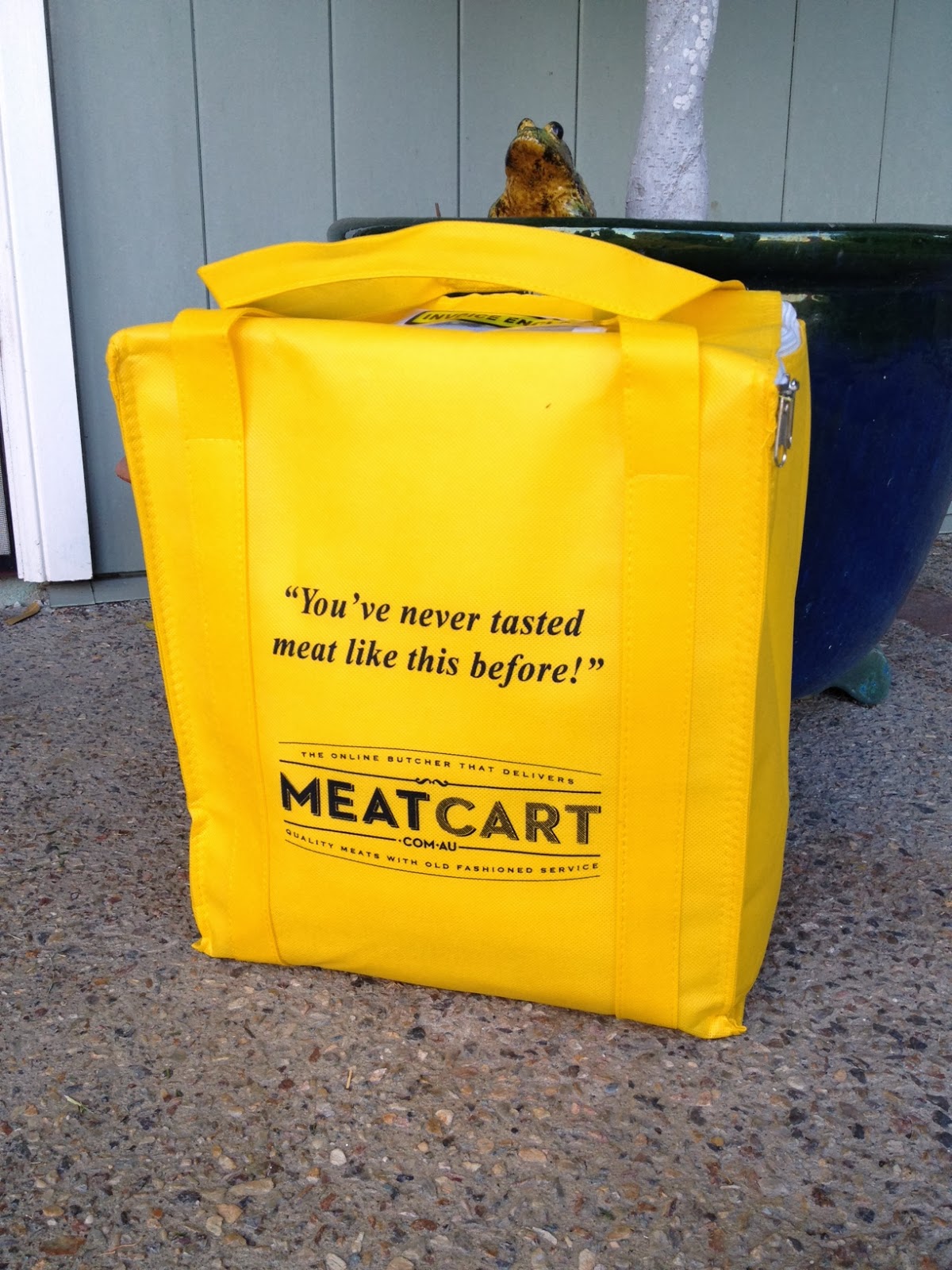 My sample pack arrived in it’s own chiller bag on the designated day. After a recent disaster with a chilled item delivery (melted ice, split containers with the contents spilled throughout), I was very impressed to see that the chiller packs were still very icy and the interior fully chilled. I had received a selection of popular products, in 500g packs (they also come in 1kg packs). Included in the mix were ‘Superhero Sausages’. Further investigation revealed these innocent looking sausages actually included peas, corn and sweet potato but invisible to the naked eye. Clever!

We jumped right in that night with the beef fillet mignons wrapped in bacon, that I pan fried and finished in the oven. These steaks would usually be too big for us for a week night dinner but in the interests of a fair review, we ate one each. They were moist and tender and cooked almost like a sous vide steak. Very nice with a Barossa shiraz. 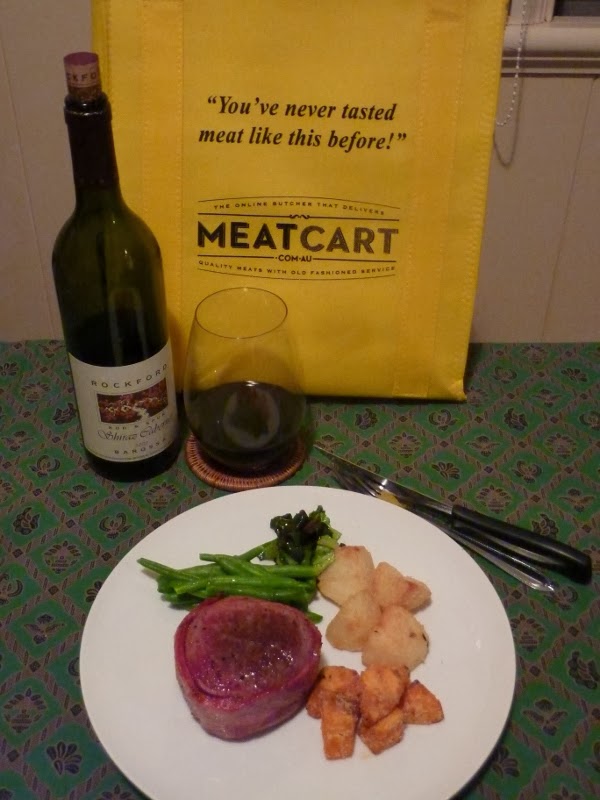 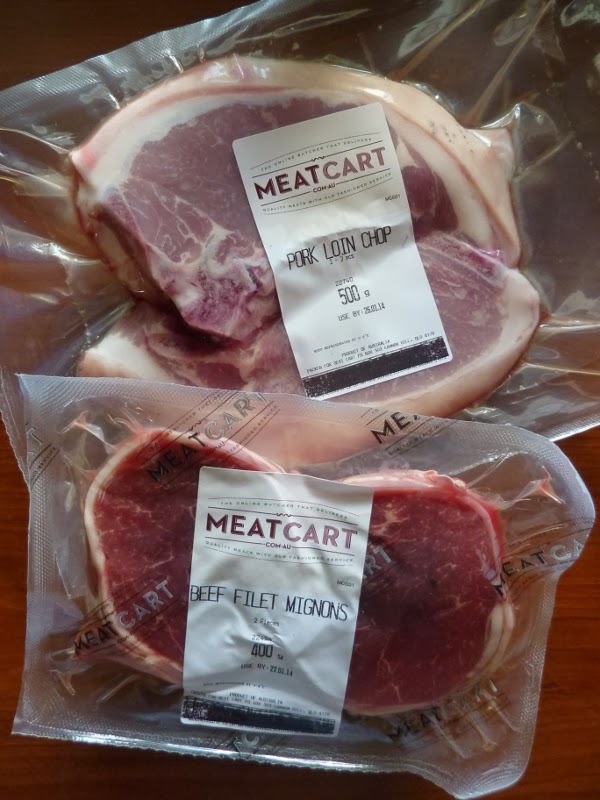 On the Australia Day long weekend, I opted for the lamb rump, marinated in olive oil, lemon juice, marjoram, rosemary and many, many chunks of garlic. Onto the BBQ for a few minutes on either side and the lamb was done. We enjoyed it with potatoes, grilled eggplant and a salad, for lunch. The remainder I sliced thinly and used on lamb wraps for work lunches the next day. The pork loin chops were trimmed from the bone and Anthony used these to whip up a Jamie’s 15 Minute Meals in 45 minutes. 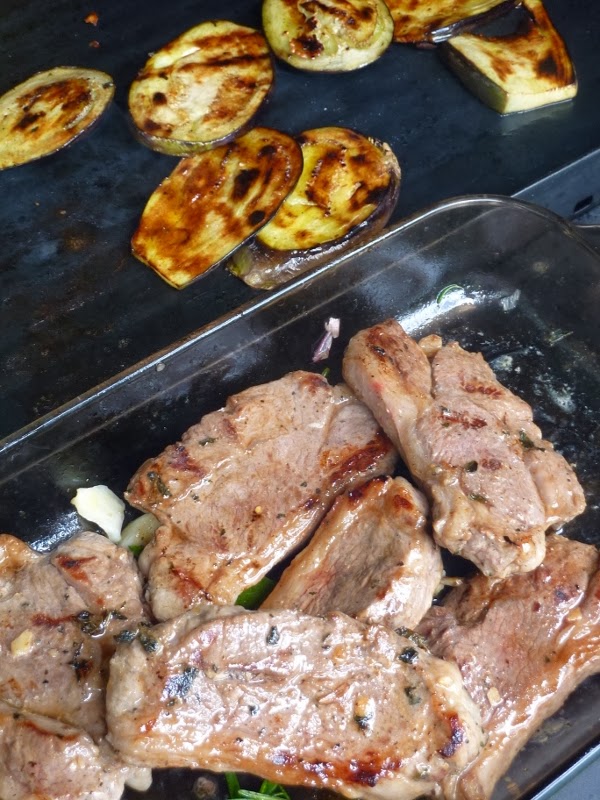 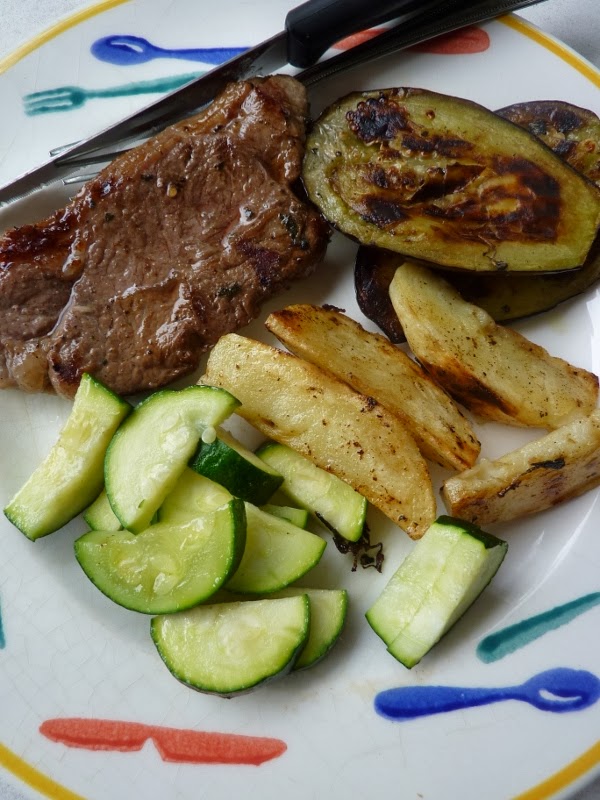 A tour of the Meatcart website suggests the pricing is competitive and there are some specials too. They also have a sub set of products under the banner ‘Correct Weight’ that are portion controlled, with all fat removed. This range is exactly the same quality as the mainstream products with the calories and portion calculations based on the Weight Watchers system.

Meatcart is based in Brisbane, also delivering to the Gold and Sunshine Coasts. Delivery is a standard $7.15 flat rate and as already mentioned, comes in an insulated cooler which has been tested to keep products chilled for up to 8 hours. So if you live a busy life or like to let your fingers do the walking, Meatcart may be the answer to your problems.